By continuing to browse this site, you are agreeing to our use of cookies.

Today, we are pleased to announce the release of ABViewer 15! Our team has been working hard to make ABViewer better, faster, and more reliable. We also added some great new features and improved the existing ones — keep reading to know more about this major upgrade.

We completely revamped 3D functionality in ABViewer and decided to replace Open Cascade Technology with our own 3D kernel. This makes us independent of any third-party and allows to respond swiftly to your requests. In this new version, we have already:

ABViewer 15 brings great performance improvements. It is especially noticeable if you work with large files.

Navigation around a drawing or model using the Pan and Zoom tools became smoother and quicker.

In addition to making the conversion faster, we added new useful settings that you can find on the Loading/Saving tab of the Options window. The most important one is Layers. If it is turned on, ABViewer will save the original layers of your PDF file. 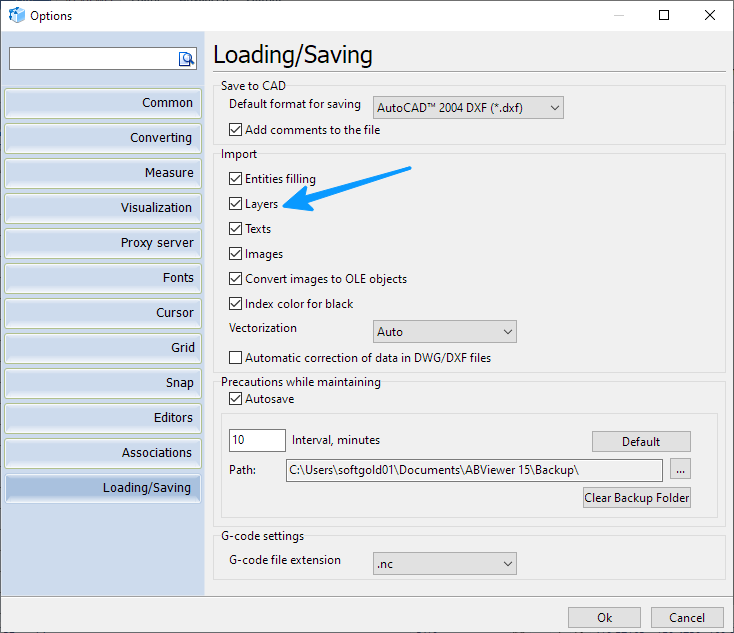 You can also set up conversion in a such way that texts and images from your file won’t be converted.

We continue to expand G-code generation capabilities and now it is possible to:

By the way, our team created a video tutorial explaining all the ins and outs of G-code generation in ABViewer: https://cadsofttools.com/products/abviewer/tutorials/how-to-generate-g-code-from-2d-dwg-or-dxf/

Sometimes we get files with several drawing sheets in the model space. Such files can cause difficulties, for example, when you need to print the sheets separately. That is why we decided to add the Layout Detector feature. Its button can be found on the Advanced tab.

This feature defines automatically the sheets drawn in the model space and allocates them to layouts. Just in few clicks!

With the aim to improve your editing experience, we added new tools and features to ABViewer 15.

Using the Cloud tool, you can create a revision cloud with a freeform polyline.

We also added the Autosave feature to prevent you from losing any changes you make. You can activate it on the Loading/Saving tab of the Options window. And new settings that enable to turn on/off:

We have already mentioned that interaction with structure of 3D models became faster. Besides this, now it is possible to switch between the selection modes of 3D model elements.

On the Visualization tab of the Options window, there is the Extended structure setting enabling to see all the elements of the 3D model structure. If you turn it off, the structure will be built up to solids.

To know the ABViewer license prices, please visit our order page. If you already have a license, version 15 will be available to you at a 50% discount.

As always, we will be glad to get your feedback and answer your questions. You can write to us at info@cadsofttools.com or in the live chat.